Prosperity on country: How to reposition the social, cultural and economic value of Indigenous people in the Goulburn Murray region 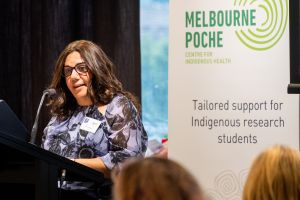 Dr Nixon completed her PhD in 2021 as a Dungala Kaiela Institute Fellow.

Prime Minister Gillard's 'Closing the Gap' speech in February 2011 called on the country's First Peoples to take responsibility for improving their situation. This kind of rhetoric highlights one of the underlying reasons there has been no substantial improvement in the position of Indigenous Australian peoples. Indigenous peoples are predominately identified as 'the problem' and positioned as the agents who need to 'fix it', which ignores the influence of dominant culture in maintaining the current position of Indigenous peoples.

Drawing on the experience and knowledge of Indigenous and government leaders working on strategies to empower Indigenous communities, this thesis captures the work undertaken in the Goulburn Murray region of Victoria in the quest to reposition the social, cultural and economic value of Indigenous peoples.

For substantive change to be made, power relations between Indigenous and non-Indigenous Australians need to be realigned and dominant social structures reconstituted. Only once these shifts have been made can the country’s original inhabitants enjoy parity in education, health, employment, and economic prosperity. A collective approach that recognises the need for all Australians – Indigenous and non-Indigenous – to play a role in creating these shifts is needed.

This thesis is the story of the Yorta Yorta people’s quest to find prosperity on country to reposition the social, cultural, and economic value of Indigenous people in the Goulburn Murray region of Victoria. The research seeks a solution to address the disparity between Indigenous and non-Indigenous peoples from one regional community’s perspective. A shared sense of humanity is central to repositioning the value. An ability to recognise and envision a world of tolerance, kindness, and acceptance in the hearts and minds of all cultures, regardless of race, colour, or religion, can alter everything. The perspectives of participants throughout the thesis make it clear why repositioning the value of Indigenous people is so important.